The word Bible comes from the Greek word biblia, which means “books.” The Bible contains sixty-six books, written by at least forty different authors over a period of at least 1500 years. The oldest book was written about 1400 BC or earlier. The last book was written about AD 100. When we read the Bible in English, we are reading a translation of material originally written in Hebrew (the Old Testament or first part of the Bible) or Greek (the New Testament or second part of the Bible). The events described in the Bible take place in the lands north and west of the Persian/Arabian Gulf and surrounding the Mediterranean Sea.

Although the biblical books are written in different styles and reflect different cultural backgrounds, the authors believed that what they wrote was uniquely inspired by God; their words are God’s message to all people.

There are sixty-six books on the “The Bible at a Glance” chart. The first thirty-nine books, from Genesis through Malachi, are grouped in a section called the Old Testament. The last twenty-seven books, from Matthew through Revelation, are called the New Testament. Testament is another word for a will or covenant, a legally binding promise. The Old Testament describes God’s covenants with the Jewish people and his promise to bless all nations of the earth through them. The New Testament shows how this promise was fulfilled in Jesus Christ.

Despite covering over 2,000 years of human history, the Bible has a theme that unifies all of its sixty-six books. The Bible tells us what God has been doing in human history and the purposes for which he created us. The Bible’s story can be viewed as a drama in five scenes. 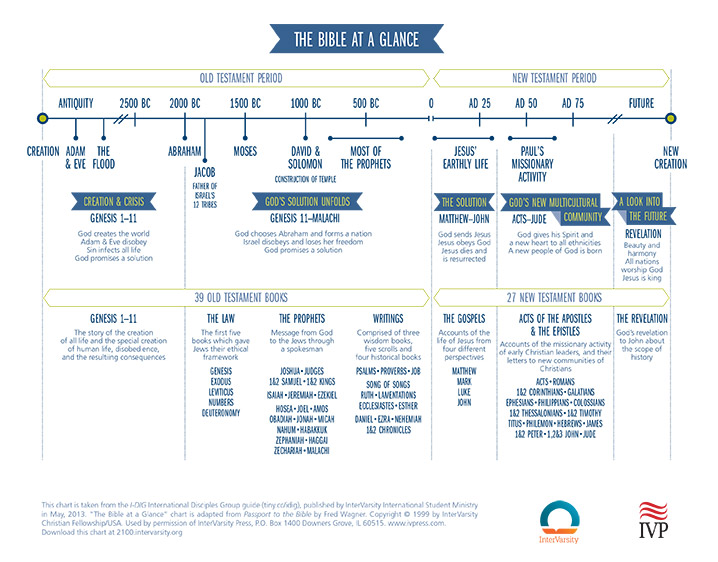 The Bible opens with the statement, “In the beginning God created the heavens and the earth” (NIV). The point of the Bible’s teaching is not to prove that God exists, but to teach us what God is like. The story of our creation is one of beauty and harmony. Everything God made was good. The first human couple, Adam and Eve, were created for relationship with God, to obey him and enjoy him as his children. The harmony God intended is seen in the picture of a garden beautifully described in Genesis 2.

The picture was ruined when Adam and Eve chose to disobey God. Their life of harmony was shattered—not only with God but inside their hearts, with each other and with the earth. The Bible calls this refusal to trust and obey God sin.

In choosing to disobey God, Adam and Eve chose to turn from God and live apart from him, acting according to their own wishes. Not only did this dishonor God but it separated them from the source of all life, and so they experienced spiritual death—and eventually physical death as well. Ever since, all humans have acted just as their original parents did, and so death, spiritual and physical, has become part of all human experience.

God’s earth was afflicted by this deadly virus called sin. But God’s love for his creation did not change; he promised a cure for sin. A child would eventually be born to a descendent of Eve. This child would take the punishment for sin on himself (see Genesis 3:15). The rest of the stories in this first part of the Bible show how God protected the earth from total pollution by sin.

This section contains the beginning stage of God’s plan to repair the damage done by human disobedience. Around 2000 BC, God chose one human, Abram (later renamed Abraham), and promised that through his son and grandson God would form a nation: Israel. The Jews, Abraham’s descendants through his son Isaac and grandson Jacob, would be God’s special people to keep alive knowledge about him on the earth.

The stories of how God cared for Israel point ahead toward God’s solution for the human problem. God dramatically rescued Israel from slavery in Egypt around 1500 BC. This rescue was a picture of what he intended to do for all humans through Jesus, the Messiah, or deliverer, whom he would send. God also communicated his laws to their leader Moses so that they would know how to live healthy and harmonious lives.

Despite all God did, Israel’s history reflects the human problem of distrust and rebellion toward God. When God first gave them their own land, they frequently turned from God’s laws and did what was right in their own eyes. They were not content to live under God’s rule. They asked for a human king in order to be like other nations. When their kings listened to God and followed his ways, they had peace and well-being, especially during the reigns of David and Solomon, around 1000–930 BC.

God placed Israel among various world powers so that they could be a lighthouse to all earth’s people. God’s intention was that Israel would model the peace and wholeness that come when people obey God’s words. When Israel’s great King Solomon built a temple where people could worship God, he knew foreigners would pray to God there. The great queen of Sheba visited Solomon and praised his God (1 Kings 10:9).

But Solomon himself, who was supposed to be the wisest man in the world, began to worship other gods at the end of his life. As a result, after he died his kingdom was divided into two nations, Israel and Judah. Both nations were conquered and taken into captivity—Israel in 722 BC and Judah in 586 BC.

God did not give up on the people; he sent special messengers (prophets) to teach them how to live and remind them that the Messiah would come. To one of these prophets, Isaiah, who lived around 700 BC, God gave amazing pictures of this Messiah.

The New Testament continues the story of God’s plan for his world four hundred years after the last book in the Old Testament. The first four books, or Gospels, announce the arrival of the Messiah. Each Gospel is named after its writer and describes the life, teachings, death and resurrection of Jesus Christ. Christ is the Greek word meaning “Messiah,” the one first announced to Eve in Genesis and then to the Jewish people through the prophets.

Jesus taught that people could be born into God’s family by believing in him. He also said that God’s children should live in an attitude of love, serving others and forgiving even their enemies.

Jesus called twelve special men, the disciples or apostles, to be with him and tell others about him. But most of the religious leaders, including the leading priests and teachers of the Jewish law, did not listen to Jesus; they worked together to have him killed.

God’s solution to the human problem of sin now became clear. Jesus, who never sinned, willingly died on a cross for the sins of all people who will follow Him, trusting that His death can set them free. The punishment for sin is death, but God allowed Jesus to die for us as a substitute. Then Jesus was raised to life on the third day as a sign that he really is God’s Son. The path to God was now open.

Jesus offers to give a new heart and a new spirit to anyone who will accept his gift of life. God forgives our sins, gives us his Holy Spirit to guide and heal us and promises that we will be raised to new life with him after we die, not because of our own goodness but because of the goodness of Jesus. People may now once again live in harmony with God as his spiritual children. (Jesus’ death and resurrection occurred around AD 30.)

Beginning with Acts we read the story of those who begin to follow Jesus. They are equipped to carry on the work of Jesus. They tell all peoples that the Savior has come and that he invites them to join his new community. The books that follow are letters from leaders of the early Christian church.

The most famous of these leaders is Paul. Although he was a Jew, he obeyed Jesus’ command to tell the good news to people who were not Jews. Paul saw himself as an ambassador of God, and he wanted people to be reconciled to God through Jesus (see 2 Corinthians 5:20, NIV). Paul was beaten, shipwrecked and eventually killed because of his faith in Jesus. But at the end of his life he was able to say, “I have kept the faith. Now there is in store for me the crown of righteousness” (2 Timothy 4:7–8 NIV). Paul wrote these words before he was killed in AD 67 or 68.

Scene 5: A Look into the Future, Revelation

The prophets or messengers of God in the Old Testament looked forward with hope to the return of the Messiah as King over everything. They thought it would all happen at one time when Jesus first came. Jesus taught that there are two comings. The first was God’s coming to earth in the mission of Jesus to defeat sin and death. His second coming as King is still in the future. At that time everything will then be restored to the beauty and harmony pictured in the Garden of Eden (Genesis 1-2, NIV). People of every nation, tribe and language will worship God together (Revelation 7:9–10, NIV). The book of Revelation describes the events surrounding the return and crowning of Jesus as King.

Tags:
Bible Study
0
No votes yet

Welcome to this new International Groups Investigating God (I-GIG) Guide! Being part of an I-GIG group helps you get to know God by understanding what the Bible says about him.

Trainings, handouts, and studies to equip any student to lead an international Bible study.