Ramez Atallah and the Call Home 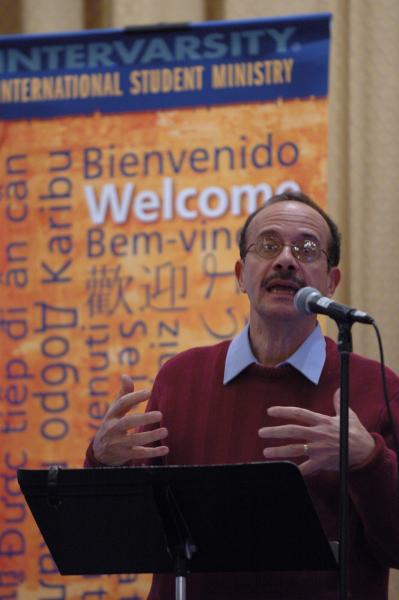 When Ramez Atallah took part in InterVarsity’s Urbana Missions Conference during his student years, the irony he witnessed was clear. All around him were enthusiastic young Americans, preparing to mount the steep cultural and language barriers that stood between their limited experience and the challenge of serving God in places like the Middle East. He, meanwhile, had escaped his native Egypt as a teen and was building a life in Montreal.

“My friends were preparing to go, and I was here sitting in Canada,” he said. “I realized it doesn’t make sense for me to stay here when the Gospel is needed in the Muslim world and I can do something to help.”

Four decades later, Atallah challenged attendees in the Urbana 09 International Students Track both to be a witness on their American campuses now and to consider how their time in the U.S. is preparing and equipping them for the possibility of returning home.

“God is equipping you now to serve and to bless your family, your country and your national church,” he said. “Don’t say no.”

In his own case, Atallah returned to Egypt with his wife and children after spending 18 years in Canada. His family had escaped his home country when the government nationalized big businesses.

His time in North America resulted in his coming to Christ, attending seminary and gaining a vision for Kingdom work. He is currently the general director of the Bible Society of Egypt.

For today’s international students, Atallah offered as a model the story of Joseph, whom God brought up from slavery to become the king’s chief advisor and, through him, saved his family from famine.

In Joseph’s case, God’s purposes were served through his faithfulness in the tasks assigned to him, his steadfastness in the face of temptation and his resisting the reflex of revenge against the brothers who sold him into slavery, Atallah said.

Likewise, he said, international students can be faithful in the work they’ve come to do, can refuse to fall into the West’s sexually loose lifestyles and can choose to not harbor anger against their home countries — even when oppression and injustice dominate one’s experience there. After all, he said, in Joseph’s case, the calling God had in store for him was a strategic one.

Atallah advised international students to spend their years in the West learning as much as they can and acquiring as many skills as possible. In particular, he said, training in marriage and parenting principles, the opportunity to build a network of relationships, and tapping into the Western mindset of efficiency and creativity are all worth the effort.

“Get the best of the West while you’re here,” he said. “And try to avoid the evils.”

For one student, Atallah’s talk seemed to magnify a vision he’d already been finding at Urbana. Before the week began, he’d been indifferent about staying in the US or returning to his native Zimbabwe. But a seminar on doing missions through business had him envisioning a career back home — of building a company that could provide opportunity for his countrymen and also serve as a vehicle for the gospel.

“I’m studying mechanical engineering, and I’m looking forward to using that as a way to reach out to my people,” he said. “I really think God is trying to prepare me for a mission in improving people’s lives.”

Dwell Among Your People