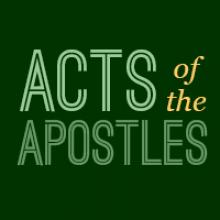 On the Jewish harvest feast of Pentecost, those who believed in Jesus were gathered waiting for the promised coming of God’s Spirit. It came upon them with the noise of a mighty wind and flames of fire, attracting a large crowd. All the believers began to tell about Jesus in many different languages. The crowd is confused and Peter begins to answer their questions.

Much of Peter’s witness involves quoting scripture about Jesus and explaining it. What role can scripture play in our witness?