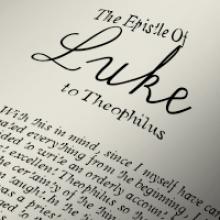 Luke 8:1 Some time later Jesus traveled through towns and villages, preaching the Good News about the Kingdom of God. The twelve disciples went with him, 2 and so did some women who had been healed of evil spirits and diseases: Mary (who was called Magdalene), from whom seven demons had been driven out; 3 Joanna, whose husband Chuza was an officer in Herod’s court; and Susanna, and many other women who used their own resources to help Jesus and his disciples. 4 People kept coming to Jesus from one town after another; and when a great crowd gathered, Jesus told this parable: 5 “Once there was a man who went out to sow grain. As he scattered the seed in the field, some of it fell along the path, where it was stepped on, and the birds ate it up. 6 Some of it fell on rocky ground, and when the plants sprouted, they dried up because the soil had no moisture. 7 Some of the seed fell among thorn bushes, which grew up with the plants and choked them. 8 And some seeds fell in good soil; the plants grew and bore grain, one hundred grains each.” And Jesus concluded, “Listen, then, if you have ears!” 9 His disciples asked Jesus what this parable meant, 10 and he answered, “The knowledge of the secrets of the Kingdom of God has been given to you, but to the rest it comes by means of parables, so that they may look but not see, and listen but not understand. 11 “This is what the parable means: the seed is the word of God. 12 The seeds that fell along the path stand for those who hear; but the Devil comes and takes the message away from their hearts in order to keep them from believing and being saved. 13 The seeds that fell on rocky ground stand for those who hear the message and receive it gladly. But it does not sink deep into them; they believe only for a while but when the time of testing comes, they fall away. 14 The seeds that fell among thorn bushes stand for those who hear; but the worries and riches and pleasures of this life crowd in and choke them, and their fruit never ripens. 15 The seeds that fell in good soil stand for those who hear the message and retain it in a good and obedient heart, and they persist until they bear fruit. 16 “No one lights a lamp and covers it with a bowl or puts it under a bed. Instead, it is put on the lampstand, so that people will see the light as they come in. 17 “Whatever is hidden away will be brought out into the open, and whatever is covered up will be found and brought to light. 18 “Be careful, then, how you listen; because those who have something will be given more, but whoever has nothing will have taken away from them even the little they think they have.”

If you had heard Jesus tell this parable, what idea or image do you think you would most remember?

In v 1 says that Jesus was “preaching the Good News about the Kingdom”. Where is the good news in this story?

In v 18, Jesus states his conclusion. What does Jesus want to teach us from this story?

What have you done about it?

If you have heard nothing - how can you begin to listen?