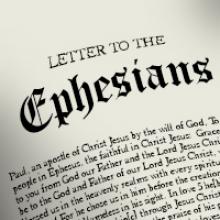 Paul begins this letter with much enthusiasm. Even though he is in prison, it seems like he was having a good day! He simply reminds us of how blessed we are that God has done so much for us through Jesus. He especially stresses that this was God’s plan from before the beginning of the world (v 4,5,9,10,11).