Art and the Bible Study 7: The Return of the Prodigal Son Luke 15
1 The tax collectors and "sinners" were all gathering around to hear Jesus. 2 But the Pharisees and the teachers of the law were whispering among themselves. They said, "This man welcomes sinners and eats with them."...11 Jesus continued, "There was a man who had two sons. 12 The younger son spoke to his father. He said, 'Father, give me my share of the family property.' So the father divided his property between his two sons. 13 "Not long after that, the younger son packed up all he had. Then he left for a country far away. There he wasted his money on wild living. 14 He spent everything he had. "Then the whole country ran low on food. So the son didn't have what he needed. 15 He went to work for someone who lived in that country, who sent him to the fields to feed the pigs. 16 The son wanted to fill his stomach with the food the pigs were eating. But no one gave him anything. 17 "Then he began to think clearly again. He said, 'How many of my father's hired workers have more than enough food! But here I am dying from hunger! 18 I will get up and go back to my father. I will say to him, "Father, I have sinned against heaven. And I have sinned against you. 19 I am no longer fit to be called your son. Make me like one of your hired workers." ' 20 So he got up and went to his father. "While the son was still a long way off, his father saw him. He was filled with tender love for his son. He ran to him. He threw his arms around him and kissed him. 21 "The son said to him, 'Father, I have sinned against heaven and against you. I am no longer fit to be called your son.' 22 "But the father said to his servants, 'Quick! Bring the best robe and put it on him. Put a ring on his finger and sandals on his feet. 23 Bring the fattest calf and kill it. Let's have a big dinner and celebrate. 24 This son of mine was dead. And now he is alive again. He was lost. And now he is found.'"So they began to celebrate. 25 "The older son was in the field. When he came near the house, he heard music and dancing. 26 So he called one of the servants. He asked him what was going on. 27 " 'Your brother has come home,' the servant replied. 'Your father has killed the fattest calf. He has done this because your brother is back safe and sound.' 28 "The older brother became angry. He refused to go in. So his father went out and begged him. 29 "But he answered his father, 'Look! All these years I've worked like a slave for you. I have always obeyed your orders. You never gave me even a young goat so I could celebrate with my friends. 30 But this son of yours wasted your money with some prostitutes. Now he comes home. And for him you kill the fattest calf!' 31 " 'My son,' the father said, 'you are always with me. Everything I have is yours. 32 But we had to celebrate and be glad. This brother of yours was dead. And now he is alive again. He was lost. And now he is found.' "

THE RETURN OF THE PRODIGAL SON 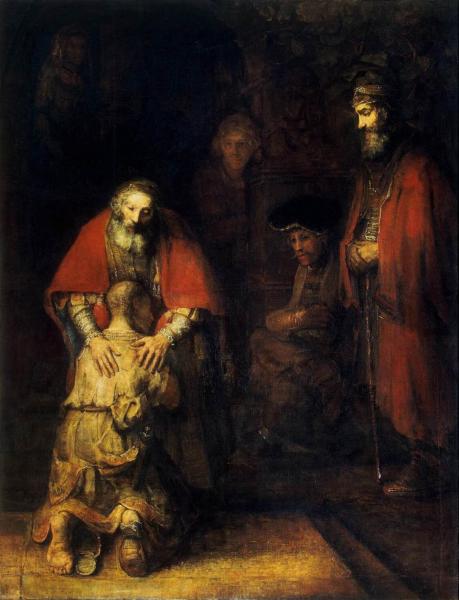 He (the son) kneels before his father in repentance, wishing for forgiveness and a renewed place in the family, having realized that even his father's servants had a better station in life than he. His father receives him with a tender gesture. His hands seem to suggest mothering and fathering at once; the left appears larger and more masculine, set on the son's shoulder, while the right is softer and more receptive in gesture. Standing at the right is the prodigal son's older brother, who crosses his hands in judgment; in the parable he objects to the father's compassion for the sinful son...(The painting) includes figures not directly related to the parable but seen in some of these earlier works; their identities have been debated. The woman at top left, barely visible, is likely the mother, while the seated man, whose dress implies wealth, may be an advisor to the estate or a tax collector. The standing man at centre is likely a servant.