This section provides a brief picture of Jewish life during the thousands of years of history that took place between Bible study 3 and Bible study 4.

The Bible begins with God’s creation of the world and mankind (Genesis 1-3). We look at that in Bible studies 2 and 3. Genesis 4-11 reveals the depth of human wickedness and God’s responses to that evil. It ends with God creating different languages and cultures.

Starting at Genesis 12, the Bible’s Old Testament focuses largely on one people group. At least 300 years after Genesis 3 (Bible Study 3) and 2500 years before Jesus (Bible Studies 1, 4-8), God spoke to Abraham and made a covenant (promise) with him that he would become the father of the nation of Israel (Genesis 12-25). Abraham’s grandson, Jacob, who was later named Israel, had twelve sons. Their descendants became the 12 tribes of Israel, the Jewish people.

Image Above: A man and his donkey in Israel

The family, tribe, and Jewish law were the main structures of society. Thus, new family connections forged through marriage or adoption were taken very seriously. Sons generally inherited a family’s home and wealth (such as their herds of animals). Often, the oldest son received the largest portion when his father died.

The economy was based on agriculture, trading, and (during the Roman occupation) constructing public buildings. Many men farmed, fished, or herded animals for a living. The main crops were olives, figs, grains, dates, and grapes.

Women typically married in their teenage years and then went to live with their husband’s family. They took care of the home and children. Houses often had one or two rooms, stone walls covered by stucco, dirt floors, flat roofs, small doorways, and wooden front doors. Animals might be housed in the side room or in a space below the living area at night. People often talked and then slept on mats up on their roofs during hot nights. The houses were sometimes arranged around a shared courtyard where there was a cistern to store water that was carried in and neighbors did their cooking, laundry, and other chores together. 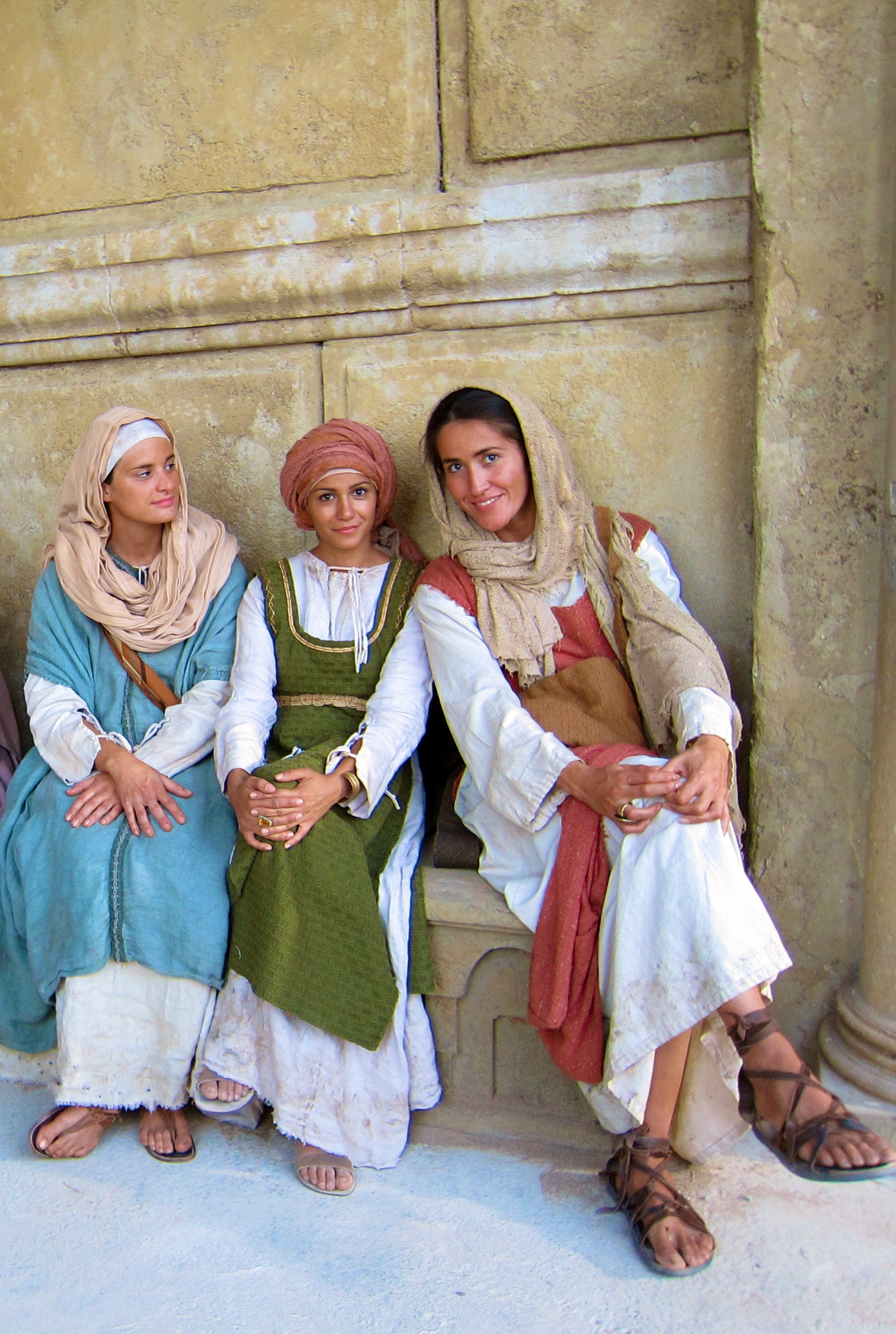 While wealthy families may have eaten up to four times a day, most families ate just twice daily. Men took a small breakfast to eat at work mid-morning. Then there was a larger dinner for the family in the evening that might include cheese, wine, eggs, fruits, and vegetables (red meat was typically just for special occasions). A feast cooked by one wealthy man’s wife included “…two hundred loaves of bread, two skins of wine, five dressed sheep, five seahs [roughly 40 liters in total] of roasted grain, a hundred cakes of raisins and two hundred cakes of pressed figs.” (1 Samuel 25:18, NIV)

There were also some instances of women making business transactions, owning land, or bringing cases to court, but women were typically not educated outside the home or even mentioned in writings of the period. Thus, it is unusual that women were allowed to follow Jesus and that the Bible talks about them at all, elevating their importance compared to how women were viewed by society at that time. 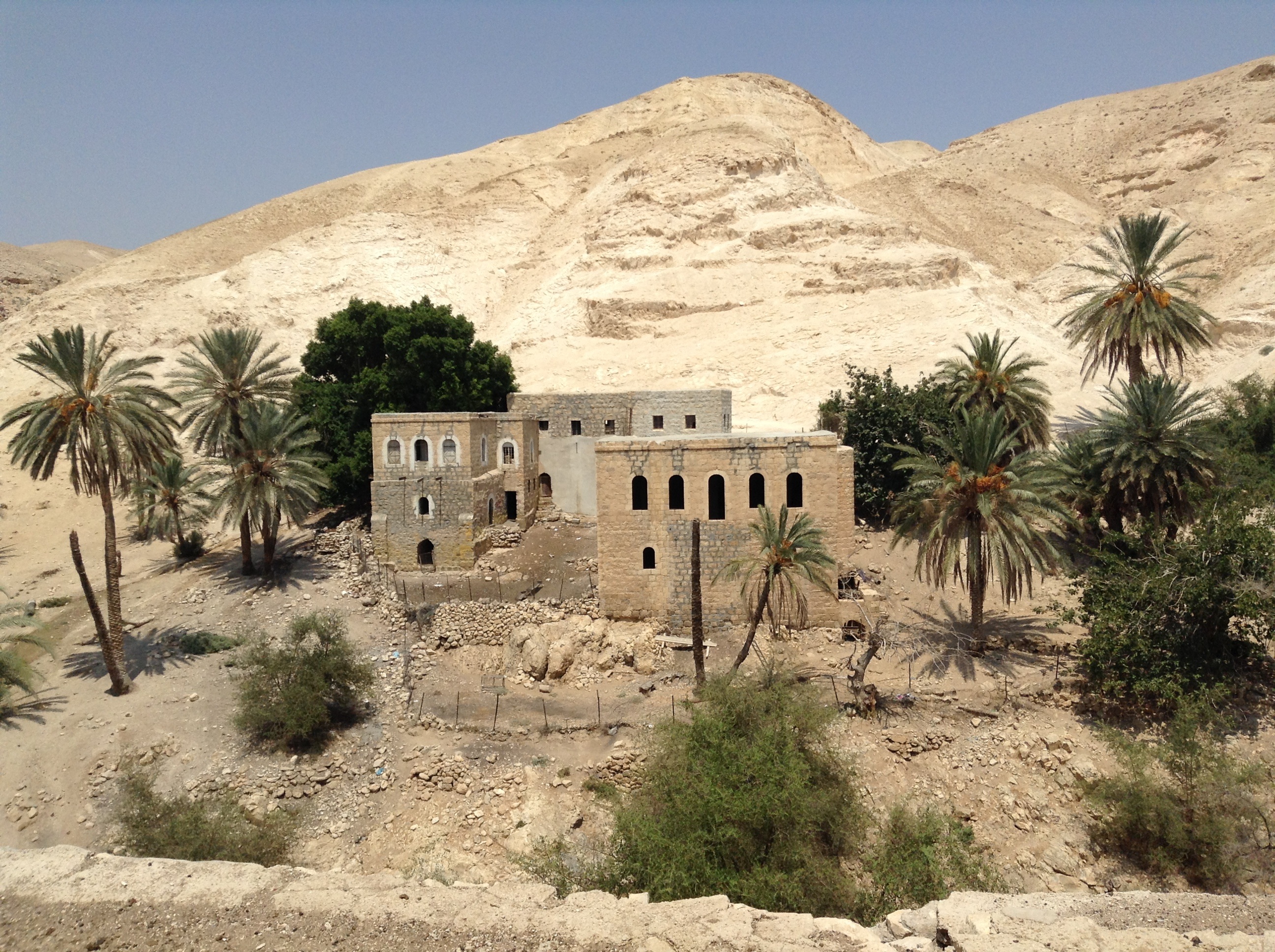 Image Above: An old settlement at an oasis

While ancient Israel was located in roughly the same proximity as modern day Israel/Palestine, the Jewish people sometimes lived in other lands (as refugees or slaves, for example). After God helped Israel escape slavery in Egypt (celebrated by Passover), the Jewish people wandered in the desert for 40 years. God traveled with them as a pillar of smoke/cloud by day and pillar of fire by night (Exodus 13:21-22). When they stopped and set up camp they erected a tabernacle tent for worship. God himself resided inside the Holy of Holies inner chamber of the tabernacle. Much later, around 1000 BC, King Solomon built the first temple in Jerusalem. It served as the center of Jewish religious life and again included God’s very presence in the Holy of Holies. 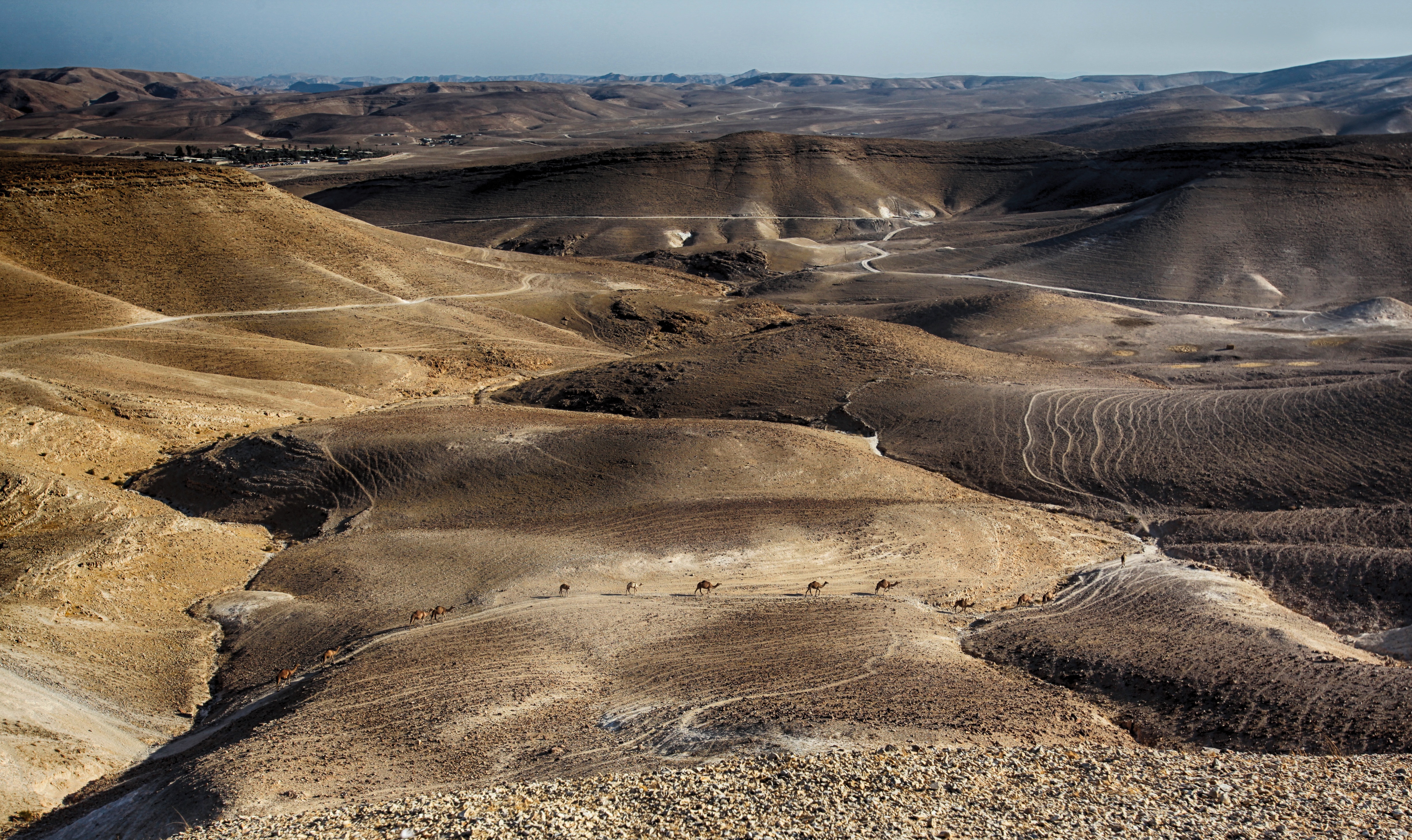 Image Above: Desert wilderness near the Dead Sea 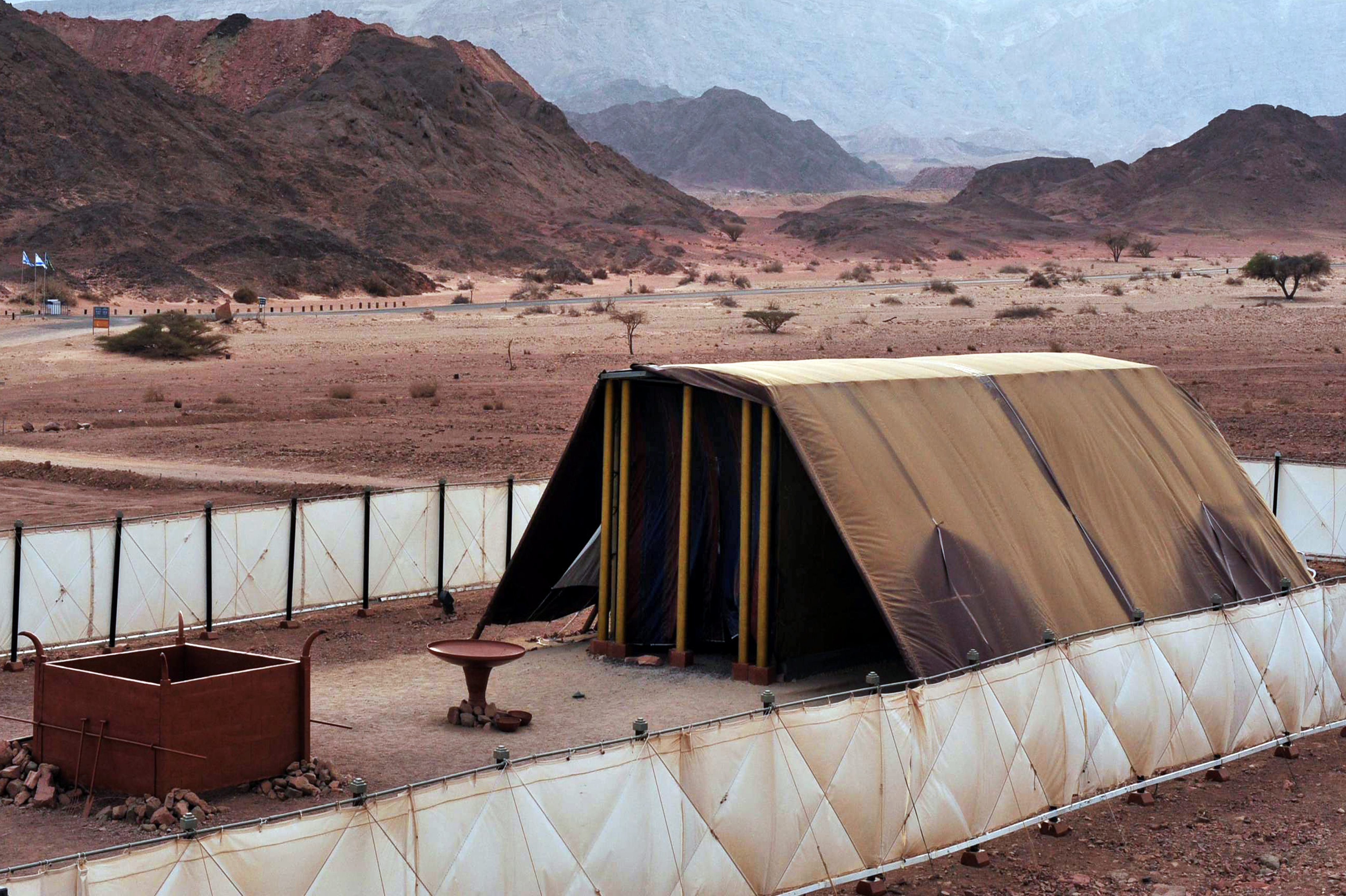 Image Above: Model of the tabernacle the Jews set up when they made camp 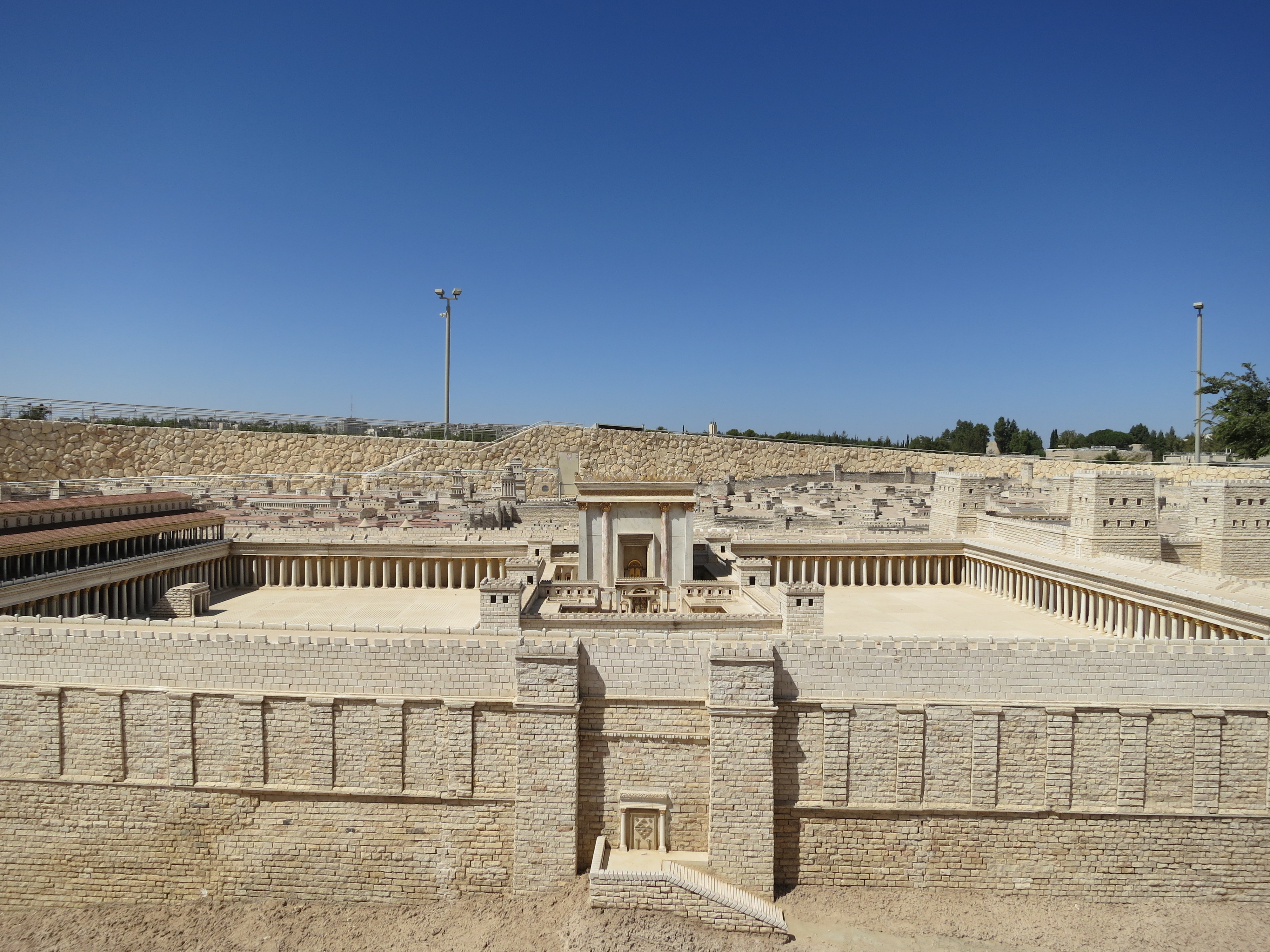 Photo Above: Model of the walled temple in Jerusalem at the time of Jesus

Scene 2, in I-GIG Section C, provides a very brief overview of the majority of the Old Testament. In the 400 years between the end of the Old Testament and the birth of Jesus, no prophets were sent to Israel, Greek culture and beliefs were introduced to the region, and the Roman army began occupying Israel.

At the time of Jesus’ birth (around 5 BC), the temple in Jerusalem was again the center of Jewish life and worship. Passover was the biggest Jewish annual festival. People often traveled to Jerusalem to celebrate there. The Jewish priests, who inherited their role from their families at birth, ran the temple. However, Jews were often unhappy with the priests because many did not properly follow Jewish purity laws, made improper sacrifices, and used their role for personal gain.

Two other groups of Jewish leaders were also influential at that time. Pharisees were scholars (but not priests). Many of their followers came from the middle class, as they typically avoided foreigners, the poor, and the many people they saw as unclean. Jesus often criticized the attitudes and actions of the Pharisees, including the many purity rules they added to the Scriptures and their focus on legalistically following those rules (instead of following the intent of the Scriptures). The Sadducees were largely a group of wealthy, upper-class priests, so they did not have as large of a following as the Pharisees. The believed in the Scriptures but rejected most religious traditions. They collaborated with the Romans on political and religious matters, which included pushing for Jesus’ trial and crucifixion.

Life was not any easier under Roman rule. Taxes were heavy. Leaders, like Pontius Pilate, prefect of the Roman province of Judea and known for reluctantly sending Jesus to be crucified, were accused of many acts of cruelty and murder. Pilate’s mistreatment of Jews eventually led to him being removed from his prefect position. Many Jews hoped God would send the messiah (savior) to lead them to freedom from their Roman oppressors.

Ordinary Jews met in local synagogues in towns and villages outside of Jerusalem on the Sabbath (day of rest), which began every Friday at sunset and ended at sunset on Saturday. They believed in God, followed food restrictions, went on pilgrimages to the temple in Jerusalem, and followed the Old Testament laws about how to properly treat others (including foreigners, as described in Leviticus 19:33-34).

Jesus was born from the Virgin Mary and raised in a middle class Jewish family. He worked as a carpenter with his earthly father Joseph, went to synagogues and the temple, and followed Jewish laws. “’I have spoken openly to the world,’ Jesus replied. ‘I always taught in synagogues or at the temple, where all the Jews come together. I said nothing in secret.’” (John 18:20, NIV) We look more at Jesus’ words and life in Bible studies 1 and 4-8. 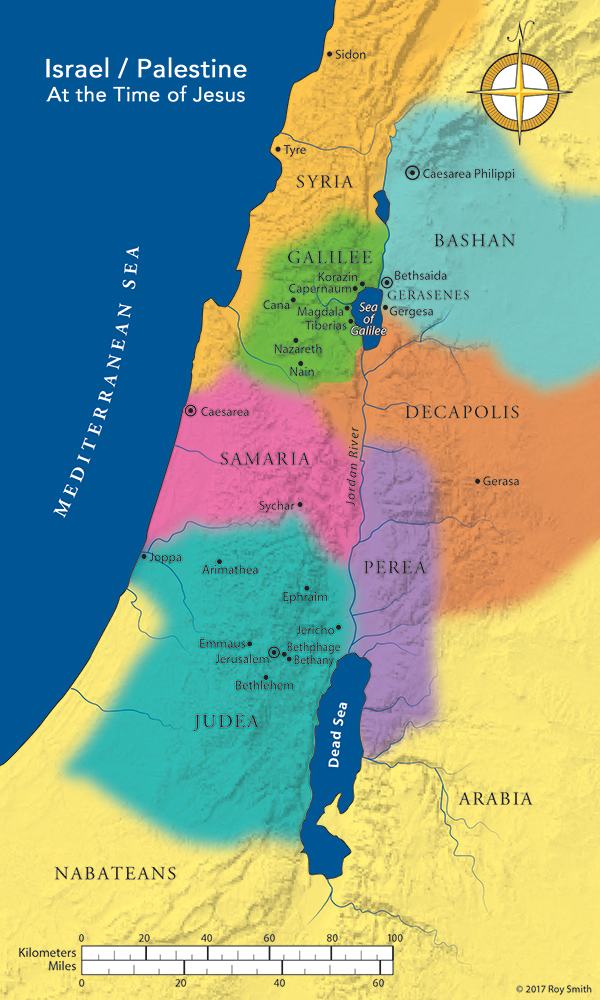