Art and the Bible Study 6: John the Baptist Luke 1
13 But the angel said to him, "Do not be afraid, Zechariah. Your prayer has been heard. Your wife Elizabeth will have a child. It will be a boy, and you must name him John...15 He will be important in the Lord's eyes. "He must never use wine or other such drinks. He will be filled with the Holy Spirit from the time he is born...57 The time came for Elizabeth to have her baby. She gave birth to a son...(Zechariah said) 76 "And you, my child, will be called a prophet of the Most High God. You will go ahead of the Lord to prepare the way for him...80 The child grew up, and his spirit became strong. He lived in the desert until he appeared openly to Israel.

Matthew 3
1 In those days John the Baptist came and preached in the Desert of Judea. 2 He said, "Turn away from your sins! The kingdom of heaven is near." 3 John is the one the prophet Isaiah had spoken about. He had said, "A messenger is calling out in the desert, 'Prepare the way for the Lord. Make straight paths for him.'" (Isaiah 40:3) 4 John's clothes were made out of camel's hair. He had a leather belt around his waist. His food was locusts and wild honey. 5 People went out to him from Jerusalem and all of Judea. They also came from the whole area around the Jordan River. 6 When they admitted they had sinned, John baptized them in the Jordan...(John said) 11 "I baptize you with water, calling you to turn away from your sins. But after me, one will come who is more powerful than I am. And I'm not fit to carry his sandals. He will baptize you with the Holy Spirit and with fire. 12 His pitchfork is in his hand to clear the straw from his threshing floor. He will gather his wheat into the storeroom. But he will burn up the husks with fire that can't be put out." 13 Jesus came from Galilee to the Jordan River. He wanted to be baptized by John. 14 But John tried to stop him. He told Jesus, "I need to be baptized by you. So why do you come to me?" 15 Jesus replied, "Let it be this way for now. It is right for us to do this. It carries out God's holy plan." Then John agreed. 16 As soon as Jesus was baptized, he came up out of the water. At that moment heaven was opened. Jesus saw the Spirit of God coming down on him like a dove. 17 A voice from heaven said, "This is my Son, and I love him. I am very pleased with him."

Matthew 14
3 Herod had arrested John. He had tied him up and put him in prison because of Herodias. She was the wife of Herod's brother Philip. 4 John had been saying to Herod, "It is against the Law for you to have her." 5 Herod wanted to kill John. But he was afraid of the people, because they thought John was a prophet. 6 On Herod's birthday the daughter of Herodias danced for Herod and his guests. She pleased Herod very much. 7 So he promised with an oath to give her anything she asked for. 8 Her mother told her what to say. So the girl said to Herod, "Give me the head of John the Baptist on a big plate." 9 The king was very upset. But he thought of his promise and his dinner guests. So he told one of his men to give her what she asked for. 10 Herod had John's head cut off in the prison. 11 His head was brought in on a big plate and given to the girl. She then carried it to her mother. 12 John's disciples came and took his body and buried it. Then they went and told Jesus.

JOHN THE BAPTIST (JOHN IN THE WILDERNESS) 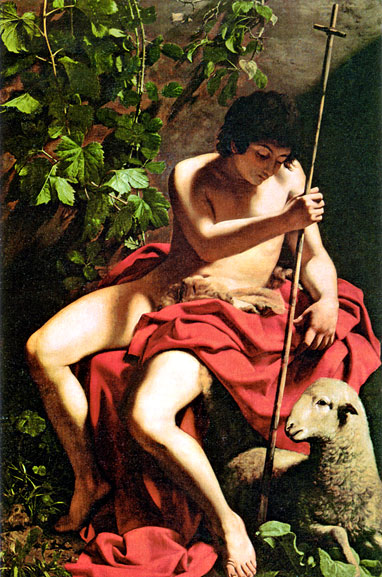 The grape leaves stand for the grapes from which the wine of the Last Supper was pressed, while the thorns call to mind the Crown of Thorns, and the sheep is a reminder of the Sacrifice of Christ.

THE BEHEADING OF SAINT JOHN THE BAPTIST 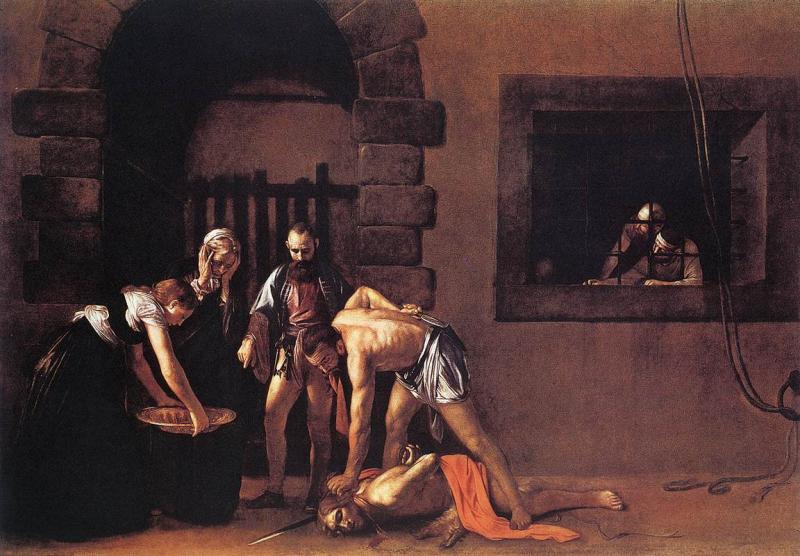