Art and the Bible Study 10: The Resurrection Matthew 27
62 The next day was the day after Preparation Day (Friday). The chief priests and the Pharisees went to Pilate. 63 "Sir," they said, "we remember something that liar (Jesus) said while he was still alive. He claimed, 'After three days I will rise again.' 64 So give the order to make the tomb secure until the third day. If you don't, his disciples might come and steal the body. Then they will tell the people that Jesus has been raised from the dead. This last lie will be worse than the first." 65 "Take some guards with you," Pilate answered. "Go. Make the tomb as secure as you can." 66 So they went and made the tomb secure. They put a seal on the stone and placed some guards on duty.

Matthew 28
1 The Sabbath day was now over. It was dawn on the first day of the week (Sunday). Mary Magdalene and the other Mary went to look at the tomb.  2 There was a powerful earthquake. An angel of the Lord came down from heaven. The angel went to the tomb. He rolled back the stone and sat on it. 3 His body shone like lightning. His clothes were as white as snow. 4 The guards were so afraid of him that they shook and became like dead men.  5 The angel said to the women, "Don't be afraid. I know that you are looking for Jesus, who was crucified. 6 He is not here! He has risen, just as he said he would! Come and see the place where he was lying. 7 Go quickly! Tell his disciples, 'He has risen from the dead. He is going ahead of you into Galilee. There you will see him.' Now I have told you." 8 So the women hurried away from the tomb. They were afraid, but they were filled with joy. They ran to tell the disciples.  9 Suddenly Jesus met them. "Greetings!" he said.   They came to him, took hold of his feet and worshiped him.   10 Then Jesus said to them, "Don't be afraid. Go and tell my brothers to go to Galilee. There they will see me."

John 20
19 On the evening of that first day of the week, the disciples were together. They had locked the doors because they were afraid of the Jews. Jesus came in and stood among them. He said, "May peace be with you!" 20 Then he showed them his hands and his side. The disciples were very happy when they saw the Lord. 21 Again Jesus said, "May peace be with you! The Father has sent me. So now I am sending you." 22 He then breathed on them. He said, "Receive the Holy Spirit.

This image of the Resurrection is part of the Isenheim Altarpiece from the chapel of St Anthony's Monastery in Isenheim, Alsace. It formed a large carved backdrop behind the altar, with two sets of folding wings. The first view, with the folding panels closed, is of the Crucifixion.  The panel shows the twisted, bloody figure of Jesus on the cross…But when the wings of the altarpiece are opened, an altogether different sight greets the viewer, now dazzled by a blaze of golden light. Three panels have appeared, showing the Annunciation (announcement of miraculous pregnancy to Mary by angel), the Concert of Angels, and the Resurrection. Unlike the outer ones, these inner panels are suffused (bathed) with light. The drama of this light is especially obvious against the dark night sky in the background of the Resurrection scene. Grünewald's message? Christ brings light to the world.  Tellingly, the soldiers in Grünewald's painting are not asleep. They writhe (to move because of pain) away from the brilliance emanating from Jesus…Above them, the serene and enigmatic (mysterious) Jesus hovers, weightless in his ethereal (airy) body. Only his punctured hands, extended towards the viewer, remind one of the torment he has so recently endured. 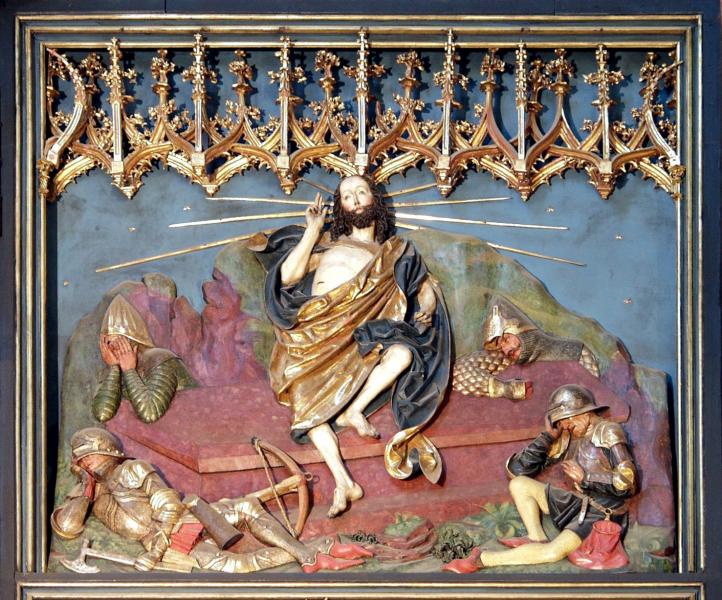 In the carving, Jesus seems to leap nimbly (move quickly and easily) from the tomb. The alteration in his bodily state is suggested by the unopened coffin lid, through which his body has passed. The soldiers are dressed in 15th century armor and clothing, and they carry lethal (deadly) crossbows and clubs.

Many people saw Jesus die on the cross.  Some of these were enemies of Jesus (Roman soldiers, some Jewish leaders) and his friends (Jesus’ mother, his disciples, other women who had been helped by Jesus).  His friends buried him quickly before sunset with the permission of the Romans.

This also describes what happens to every Christian when, in their hearts, they cross from unbelief to belief.  Jesus breathes the Holy Spirit into them.