Art and the Bible Study 9: Crucifixion with a Donor Luke 23
33 The soldiers brought them to the place called The Skull. There they nailed Jesus to the cross. He hung between the two criminals. One was on his right and one was on his left. 34 Jesus said, "Father, forgive them. They don't know what they are doing." The soldiers divided up his clothes by casting lots. 35 The people stood there watching. The rulers even made fun of Jesus. They said, "He saved others. Let him save himself if he is the Christ of God, the Chosen One." 36 The soldiers also came up and poked fun at him. They offered him wine vinegar. 37 They said, "If you are the king of the Jews, save yourself." 38 A written sign had been placed above him. It read, ~this is the King of the Jews.~ 39 One of the criminals hanging there made fun of Jesus. He said, "Aren't you the Christ? Save yourself! Save us!" 40 But the other criminal scolded him. "Don't you have any respect for God?" he said. "Remember, you are under the same sentence of death. 41 We are being punished fairly. We are getting just what our actions call for. But this man hasn't done anything wrong." 42 Then he said, "Jesus, remember me when you come into your kingdom." 43 Jesus answered him, "What I'm about to tell you is true. Today you will be with me in paradise." 44 It was now about noon. The whole land was covered with darkness until three o'clock. 45 The sun had stopped shining. The temple curtain was torn in two. 46 Jesus called out in a loud voice, "Father, into your hands I commit my very life." After he said this, he took his last breath.

John 19
25Jesus' mother stood near his cross. So did his mother's sister, Mary the wife of Clopas, and Mary Magdalene. 26 Jesus saw his mother there. He also saw the disciple he loved standing nearby. Jesus said to his mother, "Dear woman, here is your son." 27 He said to the disciple, "Here is your mother." From that time on, the disciple took her into his home.

Luke 23
47 The Roman commander saw what had happened. He praised God and said, "Jesus was surely a man who did what was right." 48 The people had gathered to watch that sight. When they saw what happened, they beat their chests and went away. 49 But all those who knew Jesus stood not very far away, watching those things. They included the women who had followed him from Galilee.

CRUCIFIXION WITH A DONOR 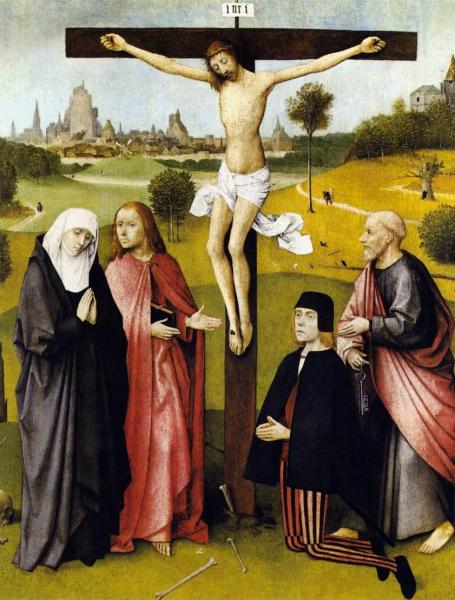 The composition shows a sort of hierarchical intercession procedure (commonly used by Roman Catholics). The kneeling donor (someone offering an object, money or his life as a sacrifice) is praying for his salvation. He is accompanied by his patron, St Peter, identified by the key in his hand. Turning towards St John the Evangelist, St Peter presents his protégé. St John then looks towards the Virgin, asking her to intercede with her Son, which she does by praying. Christ figures on the cross as a sign of redemption, his sacrifice having made possible the salvation of the human race. The scene is portrayed in the place reserved for the torture of condemned criminals, on the edge of a Brabant city which is visible in the distance...surrounded by scattered bones and crows.