Art and the Bible Study 4: Nativity Luke 2
1 In those days, Caesar Augustus made a law. It required that a list be made of everyone in the whole Roman world. 2 It was the first time a list was made of the people while Quirinius was governor of Syria. 3 All went to their own towns to be listed. 4 So Joseph went also. He went from the town of Nazareth in Galilee to Judea. That is where Bethlehem, the town of David, was. Joseph went there because he belonged to the family line of David. 5 He went there with Mary to be listed. Mary was engaged to him. She was expecting a baby. 6 While Joseph and Mary were there, the time came for the child to be born. 7 She gave birth to her first baby. It was a boy. She wrapped him in large strips of cloth. Then she placed him in a manger. There was no room for them in the inn. 8 There were shepherds living out in the fields nearby. It was night, and they were looking after their sheep. 9 An angel of the Lord appeared to them. And the glory of the Lord shone around them. They were terrified.  10 But the angel said to them, "Do not be afraid. I bring you good news of great joy. It is for all the people. 11 Today in the town of David a Savior has been born to you. He is Christ the Lord. 12 Here is how you will know I am telling you the truth. You will find a baby wrapped in strips of cloth and lying in a manger." 13 Suddenly a large group of angels from heaven also appeared. They were praising God. They said, 14 "May glory be given to God in the highest heaven!   And may peace be given to those he is pleased with on earth!"   15 The angels left and went into heaven. Then the shepherds said to one another, "Let's go to Bethlehem. Let's see this thing that has happened, which the Lord has told us about." 16 So they hurried off and found Mary and Joseph and the baby. The baby was lying in the manger. 17 After the shepherds had seen him, they told everyone. They reported what the angel had said about this child. 18 All who heard it were amazed at what the shepherds said to them. 19 But Mary kept all these things like a secret treasure in her heart. She thought about them over and over. 20 The shepherds returned. They gave glory and praise to God. Everything they had seen and heard was just as they had been told. 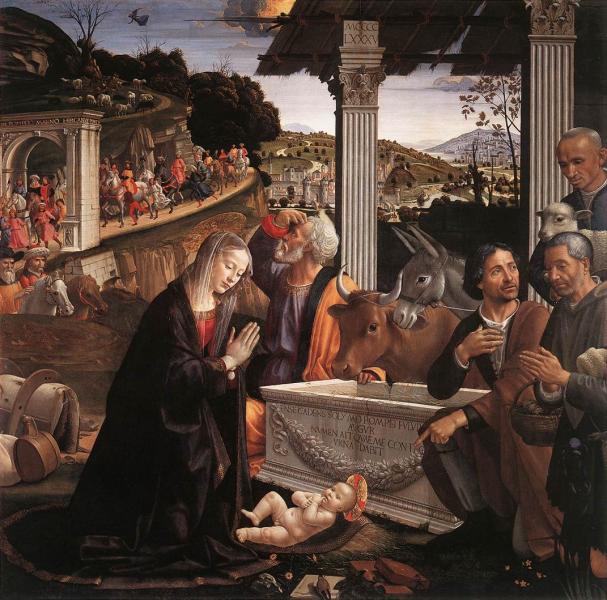 Domenico Ghirlandaio was Italian but was influenced by Flemish painters (from the area of the Netherlands and Belgium).  This is shown by the attention to details and the symbolic role of objects or people.  Some of this symbolism is: the farthest city on the right is symbolic of Jerusalem; the dead tree is symbolic of its conquest; the left city is symbolic of Rome; on the left is a long procession of magi; the ox and donkey are symbolic of the Jews and Gentiles.  There is an ancient stone coffin, symbolic of Jesus’ death with the inscription "Ense cadens soly mo Pompei Fulvi[us] augur Numen aitquae me conteg[it] urna dabit" referring to Fulvius, killed by Pompey the Great during the Roman conquest of Jerusalem, who prophesied that from a coffin a God will rise, a reference to the victory of Christianism over Paganism. 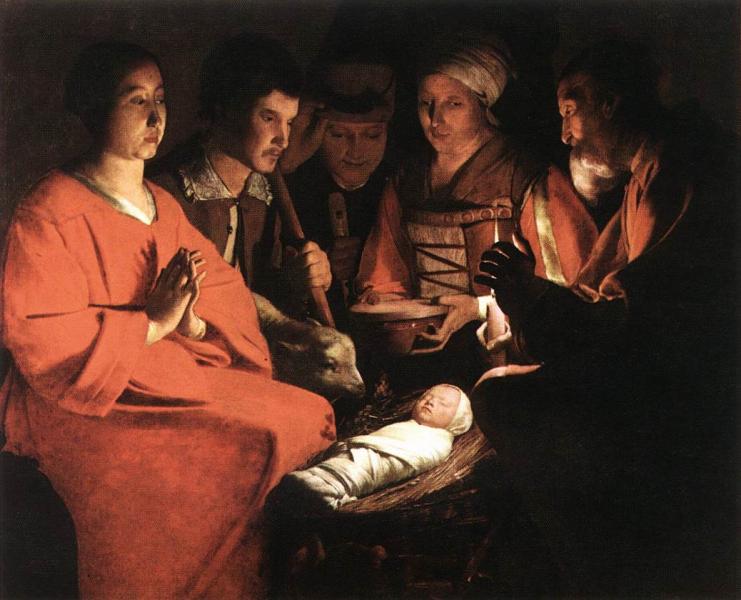