Art and the Bible Study 3: The Crossing of the Red Sea This event took place about 1300 B.C.  At this time, the Israelites were slaves in Goshen, Egypt. They were being mistreated and asked God to have mercy on them. God chose Moses to speak to the Pharaoh (king of Egypt) and ask for permission for them to return to their homeland, Canaan, which is today called Israel. Pharaoh refused. Moses said that something terrible would happen to Egypt. After this “plague” happened, Pharaoh still refused.  This happened 10 times. Finally, Moses said that the firstborn of each Egyptian family would die. When this happened, Pharaoh told them to leave.

Exodus 13
17 Pharaoh let the people go. The shortest road from Goshen to Canaan went through the Philistine country. But God didn't lead them that way. God said, "If they have to go into battle, they might change their minds. They might return to Egypt." 18 So God led the people toward the Red Sea by taking them on a road through the desert. The Israelites were prepared for battle when they went up out of Egypt.

--40 years later--
Deuteronomy 34
9 Joshua, the son of Nun, was filled with wisdom. That's because Moses had placed his hands on him. So the Israelites listened to Joshua. They did what the Lord had commanded Moses.

THE CROSSING OF THE RED SEA

circa 1541-1542
Artist: Agnolo Bronzino
Location: fresco on chapel of “Eleanora of Toledo” at Palazzo Vecchio, Florence 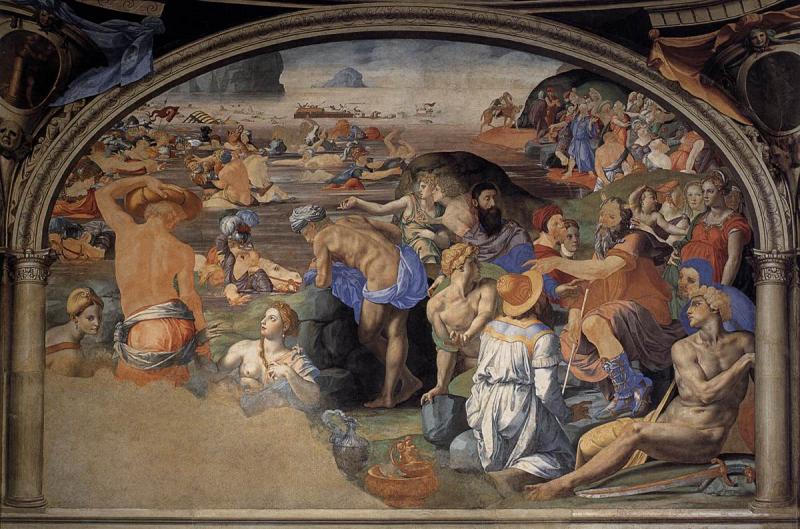 In this fresco, the artist  includes two parts of the Exodus story (the safe escape of the Israelites and the drowning of the Egyptians) and the appointing of Joshua to replace Moses, 40 years later.

1.    Look at each portion of the painting.  What are the various expressions of the people in each of the three scenes?

2.    Read the story. How is the painting similar to the story?

3.    How is the painting different than the story?

5.    If you were an Israelite at that time, how would you respond to this event?

6.    If you were an Egyptian (either one that died or survived), how would you respond to this event?

8.    What does this story tell us about God in the Bible?